Why is Case C-932/19 of the European Court of Justice so important for Hungarian consumer debtors?

The decision will affect more than 1.1 million consumer loan agreements.

We call on the judges at the European Court of Justice to deliver their decision in Case C-932/19 in plain and intelligible language in both English and Hungarian.

This is crucial for the transformation of the Hungarian legal culture from the democratic centralism of the current and previous regimes to the rule of law.

For more information please see PDF document above and the Press Release no. 34 further below.

Our mission is to enforce consumer rights and bring about fundamental change in Hungarian legal culture by promoting and defending democracy, free competition, EU standards, transparency and the rule of law – all values not shared by the Hungarian government and oligarchy.

Click on the numbers to open the source of the information.

3. Foreign currency mortgage contract ruled to be invalid by court

Thousands of foreign currency household mortgage contracts may turn out to be invalid following a Budapest Court decision (Hungarian, pdf) that cancelled an OTP Bank contract on December 7, 2012.>DénesILázár., a founder of PITEE, a consumer protection organisation in Hungary told Atlatszo.hu in an interview that the Court’s decision is setting a precedent, admitting the flaws of the Hungarian financial sector’s application of the law.  Mr.–Lázár complained about the often irresponsible lending practices of Hungarian banks; he said if the Hungarian Financial Supervisory Authority (PSZÁF) had operated properly, it would have been able to stop massive amounts of citizens taking out foreign currency loans.

Read the full interview in Hungarian on www.atlatszo.hu

The Court delivered various decisions, which show that the judges do not respect the values of the European human rights conventions. In particular, they do not understand the concept of separation of powers.

“In the determination of his civil rights and obligations, everyone is entitled to a fair and public hearing within a reasonable time by an independent and impartial tribunal established by law.”
(Art. 6(1) of the European Convention on Human Rights).

Other English documents about the constitutional court

5. Other documents in English

Translation of a Statement of the Hungarian Minister of Justice  in connection with the laws that aim of providing relief to tens of thousands of consumers who have foreign currency mortgages (February 26, 2015) 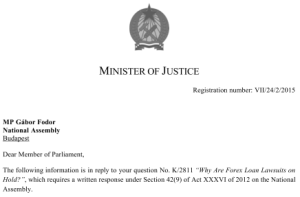 Application to the European Court of Human Rights (January 23, 2015)

Application to the European Commission (December 27, 2014)

Hungarian consumer protection organisation PITEE has published a report to explain why Case C-932/19 of the European Court of Justice is so important for Hungarian consumer debtors. The Hungarian foreign exchange (FX) consumer debt crisis has escalated to the European institutions because the Hungarian authorities have been unable to solve the crisis for more than a decade. We call on the judges at the European Court of Justice to deliver their decision in Case C-932/19 in plain and intelligible language in both English and Hungarian. This is crucial for the transformation of Hungarian legal culture from the democratic centralism of the current and previous regimes to the rule of law.

Hungarian banks systematically violated consumer protection provisions between May 2004 and July 2014, affecting at least 1.1 million FX loan contracts. The banks have hidden and manipulated the costs of currency conversion, manipulated the interest rate, provided misleading information about the effective annual percentage rate of charge, and failed to properly inform consumers about the risk of currency fluctuation. As a sanction for these violations, the law puts the existence of the FX loan contracts into the hands of the debtors (see Paragraph 213(1) of Act CXII of 1996).

Debtors have initiated tens of thousands of court proceedings against their banks since 2011. The Hungarian courts, however, have proved reluctant to comply with the debtors’ requests to relieve them of the obligations of their FX loan contracts.

The National Assembly intervened into the legal disputes between banks and debtors with the so-called “FX loan legislation” in 2014-2015. This legislation obliges the banks to compensate consumers for the hidden and manipulated costs of currency conversion and for the manipulated interest rate. At the same time, it upholds the validity of the FX loan contracts and, by so doing, obliges the debtors to bear the losses caused by the currency fluctuation.

Hungarian judges view the FX loan legislation as constituting a final and binding decision in the legal disputes between banks and consumers. Therefore, they refuse to deliver decisions which would contradict the content of the new legislation. The judges argue that consumers should be satisfied with the protection provided by the new law, which prohibits debtors from challenging the existence of their loan contracts.

The European Court of Justice is examining Case C-932/19 to ascertain whether upholding the validity of FX loan contracts is indeed in the interests of the debtors and whether Hungarian courts should allow debtors to avail themselves of the alleged protection provided by the new law.

If the European Court of Justice concludes that upholding the validity of the FX loan agreements violates European law, then more than 1.1 million FX loan agreements will disappear from the books of Hungarian banks. Furthermore, the banks will be liable for compensating the debtors for the interests and charges they have illicitly collected over the past 10-15 years. This is why Hungarian debtors are waiting for the decision.

Despite the regime change of 1989, Hungarian legal culture still lags far behind that of Western Europe. Legal education in Hungary has not changed substantially in the past 31 years. The language barrier constrains the knowledge transfer from stable constitutional states.

Mr Orbán has been able to restore an authoritarian regime because Hungarian judges do not have the required skills to force the government to respect the rule of law. Day in and day out Orbán demonstrates that nothing, not even the law, can stand against his safe majority in the National Assembly.

We call on the judges at the European Court of Justice to deliver their decision in Case C-932/19 in plain and intelligible language in both English and Hungarian. This is crucial for generating an open dialogue that builds bridges between different cultures and can lead to the transformation of Hungarian legal culture from the democratic centralism of the current and previous regimes to the rule of law.

ABOUT PITEE Our mission is to enforce consumer rights and bring about fundamental change in Hungarian legal culture by promoting and defending democracy, free competition, EU standards, transparency and the rule of law.

In the past several years we have been active in solving the Hungarian consumer debt crisis in line with the rule of law. Although many of our legal actions do not yield the desired results, we are optimistic that the future decision of the European Court of Justice in the Case C-932/19 and the conclusion of the European Commission’s investigation EU-Pilot 8572/15 will bring significant financial relief for Hungarian consumer debtors.

Read more news about us in English ->

Read more news about us in English ->

Pénzügyi Ismeretterjesztő és Érdek-képviseleti Egyesület (PITEE) is an independet consumer protection association established under Hungarian law. The association was founded in 2008. The Chairman is Dr.xDenesyLazar. He is qualified as “Rechtsanwalt” in Germany, and as Solicitor in Engaland and Wales.

One Response to English